There is a paradox that we all face in life. Our lives are a symphony of the choices we make however one of the strongest beats that set the tempo for this song is not a choice we have. Where we are born, the parents that give us life and the family we land in. For me this beat was soft, warm and as consistent as a metronome.

The town where I lived from birth to 18 was Lake Bluff Illinois. It’s the kind of place where you feel you have stepped into a Norman Rockwell painting. I know that may sound corny but I have heard plenty of non Bluffers describe it this way. Hallowed Oak, Maple and Hickory trees form a protective canopy over the town that always felt to me like a green, fleece blanket. The trees lined the streets like columns making all drivers feel like royalty. When fall settled in these giant trees shed a sea of leaves. That was a blessing and a curse as a kid, I think my shoulders are excessive large today from all the raking but the leafs were a great resource for forts, jumping piles, small fires, large fires and sewer drain cloggers for flooding the streets. As a quick side note, jumping into a pile of leaves regardless of how deep is much like running into a wall covered in ivy, it does not cradle you in a fluffy cushion. Leaves are masochistic deceivers and I’m sure are responsible for the majority of adolescent broken bones in the months of September and October. 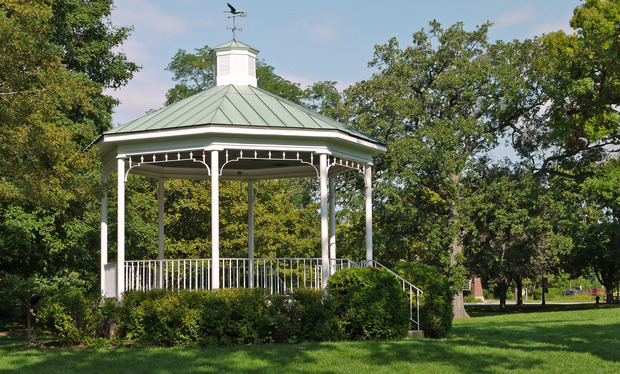 Patterns of sun and shade spots were straight off an impressionist canvas. There was almost no need for parks and recreational equipment; nature provided a jungle gym on every lot. The town is technically considered part of Chicago’s North Shore but it’s like the forgotten infant in a long line of prestigious siblings. The largest shadow was cast by neighboring Lake Forest. As a boy I quickly learned that most people even from the Chicago-land area had no idea where Lake Bluff was located but one mention of Lake Forest and their heads would snap back like they had just smelled some overly strong cologne and they would say

“Well sure I have heard of Lake Forest”

The main way into town shoots you under the viaduct. The viaduct, even that name feels like I’m talking about a family member ok maybe not a family member but at least a family pet. Every landmark in town was like that, the Ravine, the Gazebo, The Silver Bridge, Finer Foods, the Beach all family members that I visited and were a constant backdrop to my childhood. To get to those tight, lipped relatives you first dropped down under the viaduct, which housed the train tracks that connected Lake Bluff to the city of Chicago. Once you past through that viaduct it felt like colors turned on, oxygen quenched my lungs quicker and the surrounding provided a welcome home hug. You hear of horses wanting to run for the barn and I assume it was the same with Bluffers wanting to get home. The evidence displayed as fresh paint scrapes on the side of the viaduct from drivers charging home slightly too fast to make the veer left. Like a hickie which the viaduct wore with pride.

If you were to see downtown Lake Bluff for the first time no buildings would jump out as overly impressive or architecturally mind blowing. The history of this village is not ostentatious either. It was established in the late 1800’s has a religious and recreational family camp. When I was growing up many of the original summer cottages stood modest but proud. At that time you could also find empty lots which served two purposes, first the place where everyone dumped all their leaves in the fall second as an overgrown jungle exclusive to children. No parent wanted to step foot onto these eye sores of weeds and saplings. For us kids we were like pigs in shit. I build some forts in those empty lots that we worthy of the cover of Architectural Digest but my time in the empty lots was limited. The reason for this is why play in the minor leagues when the big league was just waiting a block away. The big league was the Ravine. The Ravine is a small valley that cuts thought the center of Lake Bluff’s landscape. It begins at one end of town and deposits into Lake Michigan. There is a small stream that runs at the bottom of the tiny valley, nothing deep enough to hold fish but deep enough in spots to turn Moon Boots into spongy ice blocks. At the Ravine trail head it’s pretty unassuming, it looks like a small footpath that meanders next to a small drainage stream. This path rambles over small footbridges and hops over tree roots. There were endless games of capture the flag and army. There were science experiments and we furrowed our smooth brows to comprehend the lessons the ravine would teach. 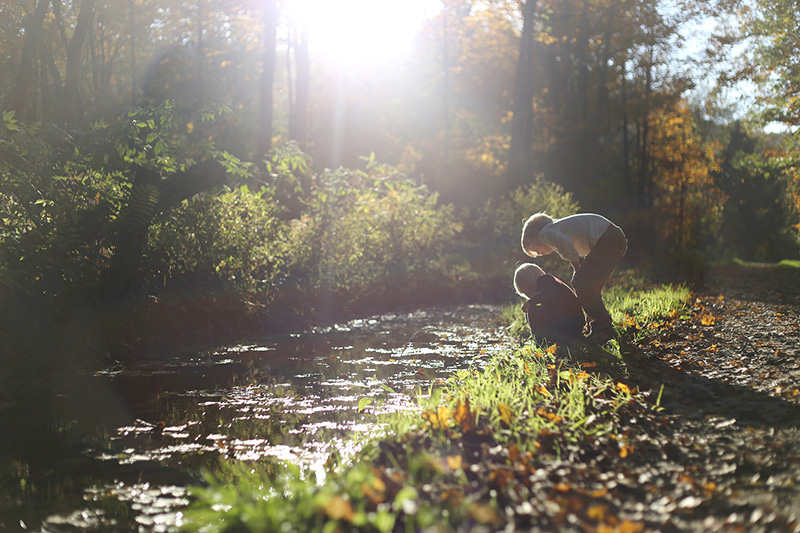